Consecrated to the Episcopacy on February 1, 2020
Patron Saint Feast Day celebrated on November 30 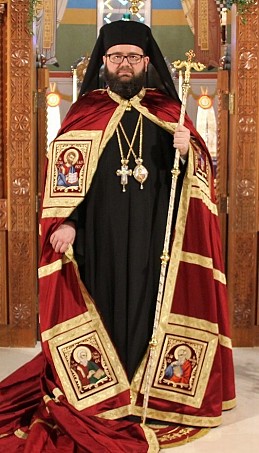 His Grace, Bishop Andrei (Hoarște) was born in 1982 in the city of Făgăraș, Brașov, Romania into an Orthodox Christian family.  The education received from his parents and his grandparents played a significant role in encouraging his love for God and the Church.  At the age of 14, in September 1996, he began studies at the “Holy Brâncoveanu Martyrs” High School Theological Seminary in Făgăraș, Romania.  However, just one year into his studies, in June 1997, his family decided to move and to begin a new life in the United States.

Arriving in the Detroit area, they attended the Divine Liturgy at Sts. Peter & Paul Romanian Orthodox Parish in Dearborn Heights, Michigan, on their first Sunday in America, and from that time made it their parish home.  Under the guidance of his parish priest, Protopresbyter Romey Rosco, the young seminarian quickly integrated into parish life as a Sunday School student, altar server, junior chanter, choir member, AROY chapter member, and assisting the clergy in various capacities.  It was also through the parish that he was sent as a student to Camp Vatra, to which he returned in future years as a volunteer staff member.

He graduated from Dearborn High School in Dearborn, Michigan in June 2000 with highest distinctions (6th out of 280 students), having been active in Students Against Destructive Decisions (SADD), French Club, Young Business People Club, and National Honor Society.  He then went on to graduate in May 2004 from the University of Michigan with highest honors, having earned a Bachelor of Arts in History and Political Science degree with a minor in French studies.

During his college years, he continued to be active in the parish, including teaching the Sunday School’s high school class, and also expanded his involvement in the Episcopate.  Having been a delegate to the National AROY Conference for several years, he was first elected to the National Board of the organization in 2001, and in 2003 was elected as its 37th National President for two consecutive terms.  In this capacity, he was actively involved in the youth programs of the Episcopate, represented National AROY on the Episcopate Council and assisted in establishing new AROY Chapters in parishes across the country.

In September 2004, with the blessing of His Eminence Archbishop Nathaniel, he entered Holy Cross Greek Orthodox School of Theology in Brookline, Massachusetts to continue his theological studies that had been interrupted seven years prior.  While at Holy Cross, in addition to educational studies and spiritual formation, he was appointed as Ecclesiarch of the Holy Cross Chapel, worked in the office of the Dean of Students as Events Coordinator and Student Liaison with the faculty, was elected Class President, and was actively involved in the organization of retreats, conferences and projects for helping the needy.  In 2006, he was blessed with the experience of participating in an OCMC mission trip to the African nation of Tanzania, where he assisted in providing catechetical instruction for young Orthodox faithful of the diocese of Bukoba.  He graduated from Holy Cross in May 2008, earning a Master of Divinity degree with highest distinction, ranking 2nd in his graduating class.  He remained at the school for further studies until December 2008.

Following the completion of studies at Holy Cross, he accepted, with the blessing of Archbishop Nathaniel, the position of Pastoral Assistant at Annunciation Greek Orthodox Cathedral in Atlanta, Georgia (serving in that capacity from March 2009 until June 2010), where he assisted the parish clergy in pastoral, liturgical and educational matters, especially with the youth.

In June 2010, he was accepted into the Patristic Theology Doctorate program at the Pontifical Oriental Institute in Rome, Italy with a full scholarship from the Pontifical Council for Promoting the Unity of Christians through its Committee of Cultural Collaboration.  He has pursued his doctoral research under the guidance of Professor Edward Farrugia SJ in the field of dogmatics/liturgics, choosing as the title of his thesis, “Spirit and Spiritedness in St. John Damascene’s Octoechos Antiphons.”

He was ordained into the Holy Diaconate on September 29, 2012 at the hand of Archbishop Nathaniel at St. George Romanian Orthodox Cathedral in Detroit/Southfield, Michigan, and then into the Holy Priesthood by the same hierarch on December 23, 2012 at his home parish of Sts. Peter & Paul in Dearborn Heights, Michigan.

After ordination, during his doctoral research, with the blessing of Archbishop Nathaniel and with the permission of His Grace Bishop Siluan of the Romanian Orthodox Diocese of Italy, he assisted liturgically at the Romanian Orthodox Parish of St. Sava of Buzau in Perugia, Italy.  While in Rome, he participated in various academic conferences and retreats at which he was invited to be a speaker.  He was the Orthodox speaker on the panel of the ecumenical conference organized in Assisi in January 2013 on the occasion of the 50th anniversary of the Vatican II document Unitatis Redintegratio, and presented a paper on liturgical music and renewal at the March 2013 Liturgical Renewal Conference at Holy Cross in Brookline, Massachusetts.  Also, during the week of Ecumenical Prayer, he was invited to give presentations and lectures in several of Rome’s seminaries and in parishes throughout Italy.

In March 2013, Fr. Dan was appointed by Archbishop Nathaniel to serve as Chairman of the Episcopate’s Department of Youth and Young Adult Ministries and as Director of Camp Vatra for Seniors.  In September of the same year, he was appointed as Romanian Editor of Solia-The Herald.  At the Annual Episcopate Congress in September 2014, at the recommendation of Archbishop Nathaniel, Fr. Dan was confirmed by the Congress to serve as Vicar to the Archbishop with responsibilities for assisting the mission and pastoral work of the parishes in Canada.

With the blessing of the Archbishop, besides his work in the office of the Chancery and being involved in the day to day administration of the diocese, Fr. Dan traveled throughout the episcopate to visit parishes on the occasion of their anniversaries and patron feast days.  He was delegated by the Archbishop to preside at general assemblies in various parishes to settle administrative issues.  He also served in several parishes as interim parish priest during vacancies and oversaw the administration of the parishes as well as the spiritual life of the following parish communities: Annunciation in Grand Rapids, Michigan (Jan- Mar 2016), Holy Cross in London, Ontario (Jan-Feb 2017) and St. Athanasius in Aurora, Illinois (Sept 2017 – Oct 2018).

At the proposal of Archbishop Nathaniel and the Episcopate Council, the Church Congress of The Romanian Orthodox Episcopate of America in Special Electoral Session elected Fr. Dan Hoarște as a candidate for the office of Auxiliary Bishop on August 31, 2019.

On October 13, 2019, he received the monastic tonsure at the hand of Archbishop Nathaniel, under the mantia of Archimandrite Joseph (Morris), Superior of St. Gregory Palamas Greek Orthodox Monastery in Perrysville, Ohio, and was given the name Andrei, after the Holy Apostle Andrew the First-called and the Holy Hierarch Andrei (Șaguna), Metropolitan of Transylvania, both commemorated on November 30.

Then, in its session on Tuesday, November 12 the Holy Synod of Bishops of the Orthodox Church in America canonically elected Fr. Andrei as “Bishop of Cleveland, Auxiliary Bishop of The Romanian Orthodox Episcopate of America” and elevated him to the rank of Archimandrite.

Since that time, His Grace has resided at Vatra Românească and continues to be involved in the day to day administration of the Episcopate, overseeing activities as requested of him by our Ruling Hierarch, Archbishop Nathaniel.